Pumpkin carving at Stone Casa is a big deal.  The kids help design the pumpkin face and then Dougie meticulously carves, colors and even adds felt eyeballs.  The pumpkins stand sentry on the front porch, welcoming trick or treaters and adding the perfect fall touch. Unfortunately, pumpkins don’t stay lookin fresh and spiffy for long. Their little faces start to sag.

. . . and they don’t smell very fresh either.  When a pumpkin has overstayed it’s welcome, you KNOW!

So what do you do with a pumpkin whose life has come to an end?  Put it in a garbage bag and leave it on the curb?  Nooo, that’s no fun.  You grab a couple of friends, grab a bat, pretend you’re Michael Bolton (no, not the aging pop artist with the flowing tresses, the other one) then you go all OFFICE SPACE on it!!

For being so mild-mannered, these children took great pleasure in pulverizing the pumpkins.  They both had crazed looks in their eyes. 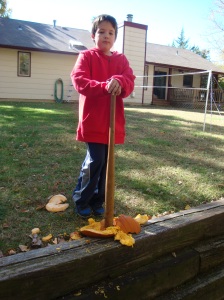 Katie insisted on wearing christmas socks that lit up with every step.  As she jumped around smashing her pumpkin, her little lights went off and on, making her look like an Elf-gone-mad at Santa’s workshop. 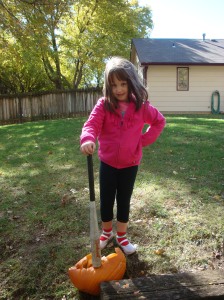 Don’t have the stomach to wield an object at your pumpkin head?  Take it for a drive!

I’m marking “Pumpkin Smashing” down as one of my favorite family activities of 2010.

I just hope the kids don’t think we’re doing the same thing with the Christmas tree.